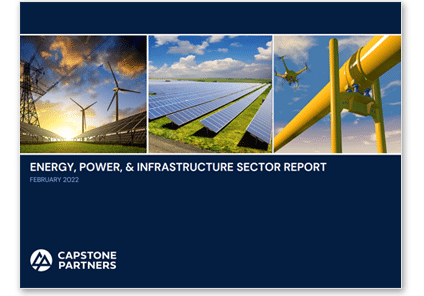 Capstone Partners released its February 2022 Energy, Power, & Infrastructure Sector Update, reporting that the key to a successful transition to renewable energy sources is the large-scale deployment of energy storage capacity, and battery storage, specifically in the near term. Over the next decade, the Battery Storage market is expected to record a 30%+ compound annual growth rate, driven by the increased deployment of intermittent generation and retirements of baseload generation, which together can increase grid variability. To maintain grid reliability, power supply and demand must be balanced at all times and at all locations. Frequency variations greater than 1% are likely to destabilize the grid, potentially causing rolling blackouts or worse.

Until relatively recently, the only mainstream model of grid scale storage was pumped hydro, which entails using electricity to pump water uphill into storage when demand is low, then releasing the stored water through turbines to generate more power when demand is high. Pumped hydro still accounts for the vast majority of the world’s installed power storage capacity, though growth in new installations is minimal compared to modern electrochemical, electromechanical, and thermal technology systems.

We estimate that over $10 billion of growth capital has been raised for battery-related technologies since 2016. The vast majority of this capital has been deployed towards technologies that address the primary challenges of lithium-ion batteries, including energy density, charge time, safety, and materials cost.

How Russia’s War on Ukraine Could Impact Geopolitical Order, Business Environments, and Mergers and Acquisitions

How Does an Investment Bank Get Paid?