We are seeing a rapid melding of emerging technologies and new operating models, particularly in the e-commerce realm, driven in large part by the activities of supply chain-focused venture and emerging growth investors like Dynamo Ventures.

After an intense flurry of deals in Q1 and Q2, fundraising in the Logistics Technology (Tech) sector has slightly declined to 42 transactions in Q3, compared to 54 in the prior quarter. However, quarterly transaction volume has still outpaced historic levels. In 2021 to-date, the Tracking & Telematics and Warehousing & Inventory Management segments have garnered the most capital raises at 27 and 23, respectively. E-commerce was the third most active segment, with 17 capital raises as of October 1.

The market has remained on fire in 2021 to-date despite the overall drop in capital raised to $755 million in Q3—largely due to the shifting emphasis on smaller rounds (B or earlier) which made up 74% of all deal volume. Some major players have raised additional rounds including digital warehousing and distribution network developer STORD ($90 million from Kleiner Perkins in September) and web-based transportation management platform EmergeTech ($130 million of Series B venture funding from Tiger Global Management and 9Yards Capital in September). Notably, online freight marketplace platform Transfix also raised $375 million in net cash through a reverse merger with G Squared Ascend's SPAC (special purpose acquisition company), G Squared Ascend I (NYSE:GSQD) in September. Upon completion of the deal, the combined entity is forecasted to garner an enterprise value of $1.1 billion.

One earlier stage company that raised a notable round is U.K.-based Vector.ai, a provider of a machine learning platform that automates administrative tasks for freight forwarders. Vector.ai secured a $15 million Series A venture capital (VC) deal led by Bessemer Venture Partners in September. Both STORD and Vector.ai are portfolio companies of Dynamo Ventures, the leading pre-seed and seed stage investor in the Logistics Technology industry. 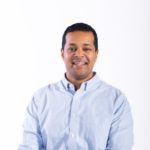 Santosh Sankar, Co-Founder and Partner
Capstone spoke with Santosh Sankar, a Founding Partner at Dynamo Ventures and an early investor in several distinguished supply chain technology startups including Stord, Gatik AI, and SVT Robotics. Dynamo Ventures is a specialist supply chain and mobility venture capital fund that focuses on pre-seed & seed stage investments in startups, Dynamo is a team of former operators and specialist investors who are committed to helping its Founders execute on their vision. They leverage their deep domain expertise to support founders with product and strategy, sales and business development, and recruiting and talent development. Learn more about the company at www.dynamo.vc.

What are some top trends you are seeing in today’s environment?

As a VC, when we're showing up to the table, the thing we're looking at is: in the next 10 to 12 years, can a particular investment be so impactful to an industry that it can return multiples on our fund? As we think about the future, I think we're going to continue to see tremendous growth around e-commerce. This isn't unobvious or profound, but as we think about it, what are the required tooling in the backend that's going to enable people to sit on their couch, order stuff online, and continue to play into this?

One area we’ve been active in is robotics—one of our first investments out of our second fund we made is in a drone business, Manna, that is doing food delivery. They're working with Tesco, McDonald’s, and a variety of restaurants in Ireland to deliver food or coffee by drone in two to five minutes. By removing the human conveyance, you’re unlocking a lot of the unit economics and alleviating some socioeconomic sensitivity around gig work.

Another area we’re seeing dislocation in the supply chain is around visibility. It’s the age-old problem that the supply chain faces, but it’s still not solved. Especially now, with the backup in container logistics in ports, BCOs [beneficial cargo owners] don’t know where their cargo truly is. Even going back to e-commerce, everybody has probably faced the screen where a UPS/FedEx/DHL status report says your package will be delivered tomorrow, but it turns out it won't be there until next week. There’s a cost in managing an upset customer, so how do you keep the carrier and even the 3PL [third-party logistics] accountable?

What do you think it’ll take to solve that problem? Is it a third party like project44, or does it need to come from the major carriers?

In my opinion, it’s unlikely that the innovation will come from an existing parcel carrier, despite e-commerce retailers acknowledging that they do not have best-in-class visibility. By the way, we've just recently invested in a business called Coros that's solving this problem. It's about actually ascertaining ground truth. What is happening at the dock? Then sharing that with the adjacent partners. I think a combination of IoT [Internet of Things] and software is the answer. There are certain scenarios where we need to be comfortable with IoT to get great data and then use that data to enable your customer to take informed action. There's another subset of problems around visibility that are probably best solved with software. We have an investment in a business called Vizion API [application protocol interface] that leverages software and their ML [machine learning] capability to ascertain the position of a container. They're taking loads of unstructured data from the ocean carriers, normalizing it, and then enhancing it with third-party data sets—geospatial data, imagery, etc., and are able to, within a certain range of confidence, say this is where your container is. And as ridiculous as it sounds, there's not something that's consistent and ubiquitous across all the ocean carriers.

Are you seeing any emerging technology that can significantly challenge some of the existing parcel and e-commerce logistics players, like DHL, UPS, FedEx, or Amazon, from a shipping and logistics perspective?

You’re starting to see startups trying to move in this direction, and we have come across a few companies with an interesting message. You're almost making a carrier, parcel carrier last-mile capability purpose built for e-commerce without the overhead and organizational debt of the legacy. There might be something there. But what you're also saying implicitly is that we move away from a world that is concentrated amongst the three or four parties here in the U.S. in FedEx, UPS, USPS and DHL, and we will ultimately look more like Europe. You’re seeing the regional parcel carriers moving in this direction. This could be a really interesting spot for entrepreneurs to play. But equally, you might need to own assets. And at that point, is it a venture opportunity or might it be more private equity backed? Food for thought.

How do you view the current capital markets environment for entrepreneurs looking to raise capital?

When we announced our fund back in June, we made a statement around how we're deploying perhaps faster than we had originally planned to or thought we would. And underlying that is, regardless of industry, the venture market is hot and it's definitely a founder’s market. We have a lot of capital open to and willing to fund early-stage ideas. Particularly, I think, in pre-seed and seed, you're seeing kind of this golden era of emerging managers who approach the table with some differentiated angle, who are willing to take some of this risk at an idea stage or pre-product-market fit stage. As you delve into Series A, B, or C, other dynamics are also impacting those funds. Due to increased competition among funds, VCs are preempting rounds either inside or outside their portfolio and are willing to pay true market rate as they are buying into the idea of improved traction. Historically, funds show up in a Series A round, and the startup is doing one to two million in annual recurring revenue; however, now you’re seeing funds show up with market terms before the startups even have that level of traction in order to avoid the competition. Furthermore, you are seeing similar activity with Series B and C peers. Overall, you are seeing VCs enter earlier and pay higher valuations.

Do you have any advice to entrepreneurs looking to raise their earlier rounds of capital?

I would recommend to entrepreneurs to do what is right for their business. A higher valuation that requires the business to grow into it by forcing you to change your model or assumptions behind your model might not be the best place to put yourself. As you think about this world in 18-to-24-month business cycles, entrepreneurs should know that the next set of investors aren’t going to necessarily care that you took an outsized round, especially if you are unable to deliver. Basically, don’t get ahead of your skis. Remember to not optimize for valuation too early as there is time to do that once you’re at the hyperscale part of your business journey. Additionally, as an entrepreneur, spend your time doing your due diligence on finding the right partners who can help you build your business. Valuations come and go as they do in the financial markers but there’s a stalwart cohort amongst the VC community which is what founders should really focus on in the early days.

Capstone Partners has developed a full suite of corporate finance solutions, including M&A advisory, debt advisory, financial advisory, and equity capital financing to help privately owned businesses and private equity firms through each stage of the company’s lifecycle, ranging from growth to an ultimate exit transaction.

How Russia’s War on Ukraine Could Impact Geopolitical Order, Business Environments, and Mergers and Acquisitions